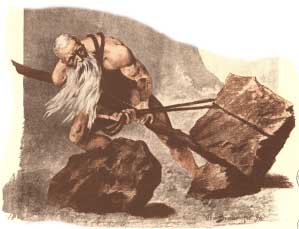 History records a number of technological revolutions, the most familiar being the Industrial Revolution of the 18th century. However, the first to take place was the discovery of tools, the creation and usage of which served to distinguish between man and animal. Next was the Neolithic Revolution -- the move from hunting game and gathering plants to the systematic cultivation of crops. The third, prior to the coming of powered steam machines, was the building and maintenance of the great irrigation systems in the civilizations of the Nile, Euphrates, Indus and Yellow River valleys. These generated cities, governments, social classes, commerce, warfare and many of our present-day institutions. From the use of a tree branch lever to lift a rock, to the raising of water, men moved to the erection of defensive walls, monuments, cathedrals and other structures requiring the elevation of earth, rock, timber and stone -- the marks of culture by which they are remembered in our day.