A Look Into the Past...
Early expositions were essentially trade fairs where the latest products were demonstrated. The first expos drew potential customers from across continents and oceans. Once on site, several weeks might be spent examining these fruits of the Industrial Revolution. The elevator was demonstrated like any other product. At times, it must have been viewed as a mere curiosity, considering the lack of public interest in Werner Von Semen's direct-drive electric elevator at the Mannheim Exposition of 1880. At other times, the elevator had a dramatic impact Ð- witness Elisha Otis' drop testing the automatic car safety at the New York Exposition in 1843. Occasionally, the elevator might win a gold medal, as did the Miller Patent Screw Machine during New England's Regional State Fair in 1878. Later, as fairgrounds spread out, the moving sidewalk was utilized. Even after the passenger elevator became part of the expo transportation system, it was tucked away behind the scenes. When the elevator became economical, soaring towers became possible. The 1,000-foot Eiffel Tower, the focal point of the Paris Exposition of 1889, would not have been possible without its three pioneering elevator systems.
Elevators allowed the Seattle Space Needle and other soaring structures to dominate expositions. A group of escalators made the Brussels Atomium possible. By that time, the elevator industry became concerned with moving small groups horizontally in shuttles and aerial ropeways or continuously conveying masses of people on moving sidewalks and stairways. The elevator industry was now in the "short-range automated transportation" business! No where was this more apparent than at the New York World's Fair of 1964. Here, elevators still made possible the "theme structure" and did yeoman's work behind the scenes in restaurants and other facilities. However, never before had so much electro-mechanical equipment been devoted to moving thousands of fair visitors comfortably, quickly and safely. Endless belts and treads continuously moved passengers by chairs and gondolas, powered hydraulic lifts for stages AND audiences, and operated turntables. No longer was the industry's product merely on exhibit. It had made the modern-day exposition possible. The following photographs, taken by ELEVATOR WORLD during two weeks at 1968 World's Fair, appeared in the Editor's Annual Study of 1968 and later displayed at the Museum of the South. 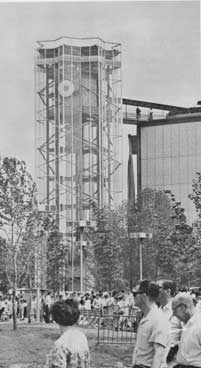 Most of those visiting the New York World's Fair 35 years ago received a map of the widespread area upon entry but still opted to take elevators to the top of the Pavilion for Better Living or the New York state Tower for a bird's eye orientation of the grounds. The former featured four escalators and five elevators by Westinghouse (left). In the dramatic New York State Tower (right) two Otis glass capsule cars lifted 30 passengers at a time to a 150-person capacity deck. The drives were basement gearless machines.

Pioneering moving walkways had eased travel across the fair grounds in earlier expositions. Now the longer distances were negotiated by a series of gondolas on a Sky Ride manufactured and installed by Von Roll of Switzerland. The four-passenger cars traveled 2,000 feet in five minutes, viewing the International Area from a height of 112 feet. 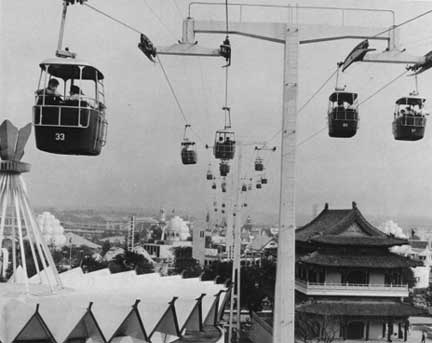 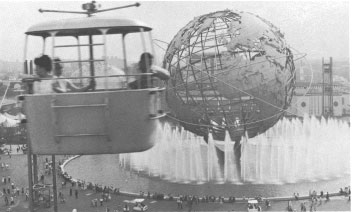 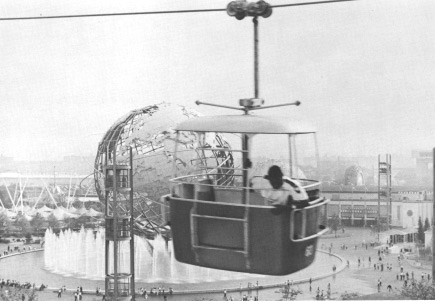 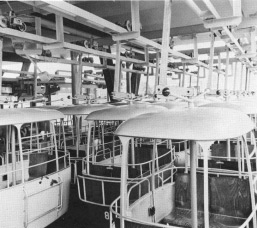 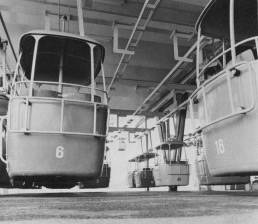 Much larger groups were able to circle the fair grounds via a Monorail train. The American Machine and Foundry's spacious rail cars offered a leisurely ride 40 feet above the crowds. As in everyday life, access to overhead or underground trains was by escalators. The Monorail was reached by two Peelle moving stairways. 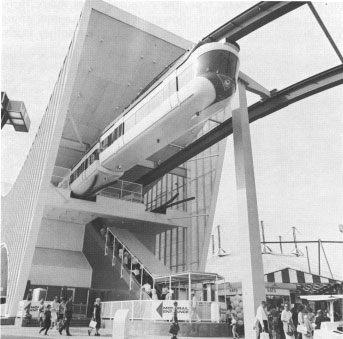 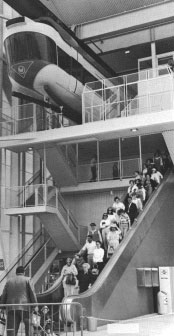 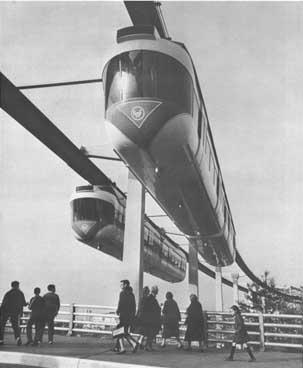 One of the earliest uses of the industry's hydraulic power was in lifting entertainers and scenery upon huge stages in the world's opera houses and theaters. However at the New York World's Fair it was the seated audience that was elevated into the IBM Theater. Although the speaker – appearing on a small hydraulic platform - stated the grandstand would move, the fair's greatest gasp came when an overhead trapdoor opened, all passed through it closed behind, leaving them in pitch dark – momentarily. Montgomery Elevator Company was responsible for installing the two-piston hydraulic system that elevated 420 passenger 53 feet into a viewing area. 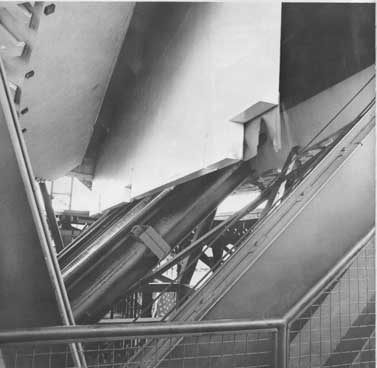 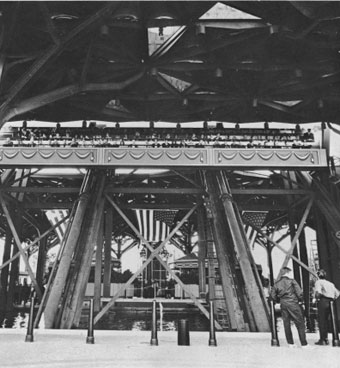 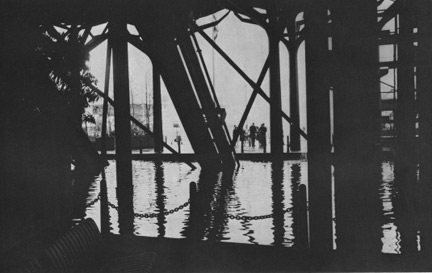 What if a grandstand moved horizontally instead of upward? The seven 55-passenger rolling grandstands in the U.S Pavilion took visitors through silently opening and closing doors, in and out of a series of theaters – in comfort – and rapt attention. Walt Disney was to later use such techniques to move group of passengers from one venue to another in his parks. 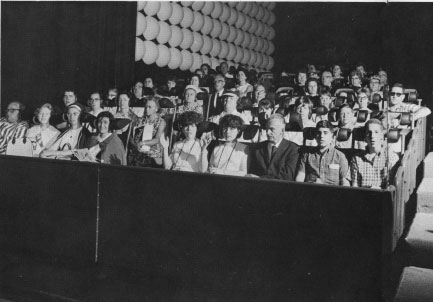 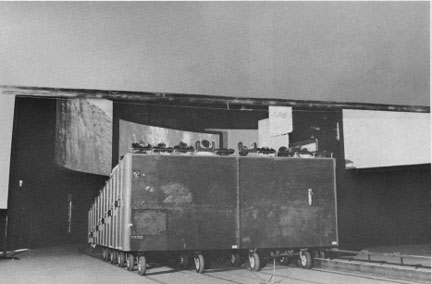 Forty-five escalators were the workhorses at the New York World's Fair, behind the scenes and continuously moving visitors into Pavilion exhibits. Moving stairways between the kitchen level and the dining area at the Top of Fair restaurant provided thousands of trips a day for heavily laden waiters – skilled at riding "no hands" (40). However, parents and children knew well the lesson – "step on and off carefully and hold the handrail and/or an older person's hand!" 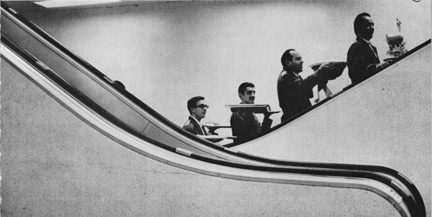 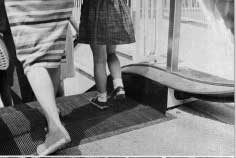 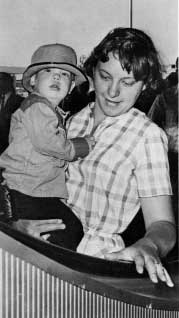 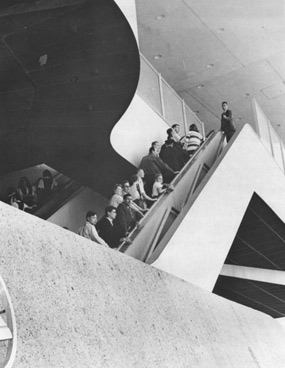 Continuous conveyors for individuals and small groups were an important part of the process, whether linked chairs or small watercraft – and were necessarily fed by the old standby people-conveyors of the elevator industry – movingstairs and moving sidewalks! Walt Disney opted for the water road in the UNESCO Pavilion. Everyone came out humming, "It's a Small, Small World?" Elsewhere it was "chairs, chairs, chairs" – Just like a moving sidewalk except that a passenger could sit down and rest! 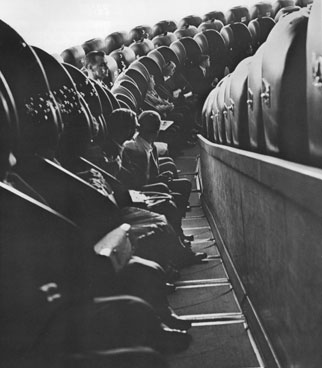 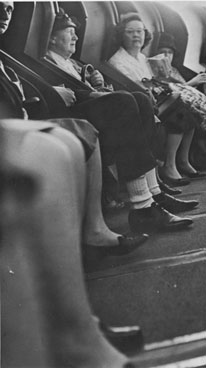 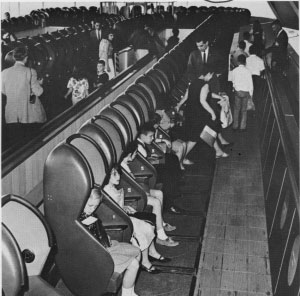 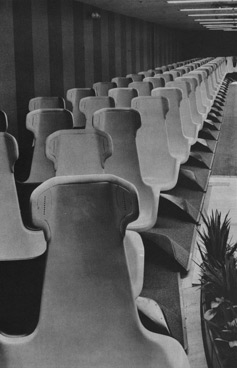 It would have been difficult for millions to have viewed the revered "Pieta", quietly, and in an orderly fashion, without the assistance of three tiered moving sidewalks by Stephens-Adamson. No personal contact, shuffling of feet or conversation was evidenced in the Vatican City Pavilion as viewers silently glided past Michelangelo's masterpiece of sculpture. 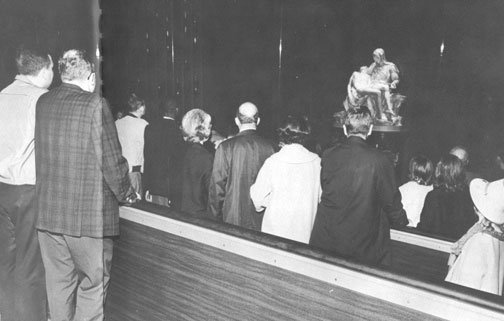 Visitors to the Elevator Museum might be interested in the equipment tabulation and locations made by the Editor of ELEVATOR WORLD, at the time. The list and map, created early in the life of the World Fair, allowed members of the industry to more easily find the various pieces of people movers that made this – and every subsequent large fair - manageable! 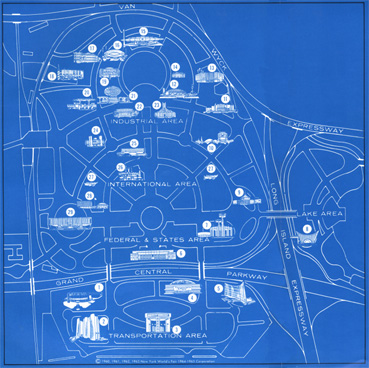