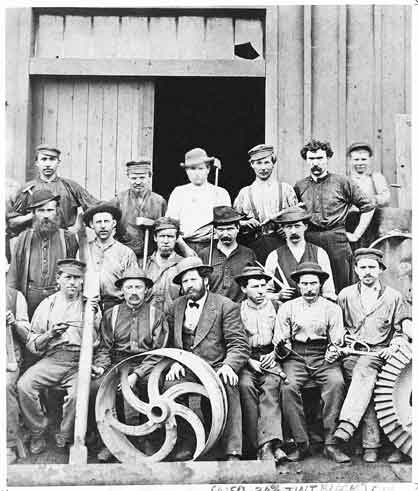 In 1963, while editor of ELEVATOR WORLD, your acting curator edited the first (but brief -- 40 pages) history of the elevator industry. Included, almost as an after-thought, were three pages of recollections by four veterans whose average service within the industry was half a century -- a total of 201 years! Then in the autumn of their years, they reflected upon the early days in the vertical transportation field. After the issue's publication, ELEVATOR WORLD received more comments upon the reminiscences of Ray Berry, Frank Buckridge, George Reppert and Nate Schlesinger than any other part of the history. Later, during several decades of visiting with veterans in other national elevator industries and collecting memorabilia, the writer found the personal stories and photographs of our company's first building, the founding group of employees, or the founder, himself, said as much about the evolution of the industry as the march of equipment and techniques. It was therefore decided to include such reminiscences and photos within the first online museum. Human interest provided by veterans can breathe life into an industry, the core of which has usually been seen as cold, hard machinery. In this Wing, we will collect and present the human interest information concerning veterans, their associates and their environments, as well as the companies considered to have changed the course of history in some manner. "A picture is worth a thousand words," a sage Chinese is reported to have said; photos of founders and their workers, the original site, the oldest employees and other human interest will personalize and color this museum's content. Man does not live by machinery alone.