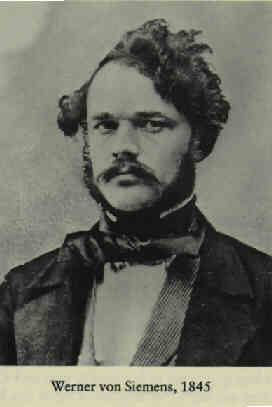 The story of the German House of Siemens clearly mirrors the revolution effected by electrotechnics in the last half of the l9th century. Werner von Siemens, inventor of the electric elevator and the oldest of the Siemens brothers, had every opportunity to carry out his early electrical experiments while serving a prison sentence for acting as a second in a duel. During this period of confinement, he invented a galvano-plastic process, sold it to secure funds for his experiments and was exasperated when pardoned and deprived of his seclusion! At the age of 26, finding that British laws gave an inventor protection not found in Germany, he and his brother Karl moved to England where they registered his Werner's patent, for gold and silver electroplating.

Werner was soon back in the German Army where, it is recorded, he developed guncotton. He was promoted to operate the powder factory at Spandau, but wrangled a transfer to a staff which was replacing Army optical telegraphs with electrical. At last he was in his chosen field. After resigning his commission, he called in his brothers Karl and Friederich to establish Siemens brothers and the firm began taking orders for telegraph systems.

Karl soon captured the Russian market, first winning the Czar's favor by making a private telegraphic installation which ran down a drainpipe, leaving the appearance of the palace unmarred. Siemen's Russian branch went on to become one of their most important, rivalled only by that in England, opened by Wilhelm. 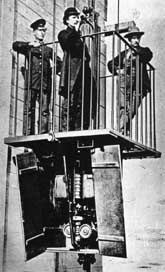 There were diversions. In 1857, Werner invented the pneumatic tube system. At the same time, Wilhelm was coordinating with Friedrich in the development of a regenerative gas condenser for steam engines. This was later modified and patented in 1856 by Friedrich, in the form of the gas regenerative furnace which was to revolutionize the steelmaking industry. These side excursions, as important as they were, did not deter the brothers from their primary interest — electricity — and in the decades that followed, their firm became world famous for the telegraphic apparatus it manufactured and the transmissions systems it con- structed.On land, the brothers erected the first great telegraphic line on the continent, linking Berlin and Frankfort. At sea, they laid six Atlantic cables from the largest cable-laying ship of the day, built by Werner. One submarine line covered a distance of 3000 miles.

The brothers also applied themselves to the task of transmitting mechanical work into electrical energy. This was facilitated by Werner's development of the shuttle armature for the generation of alternating current. The first generators that performed satisfactorily were shown at the Paris Exhibition in 1867 and Siemens was among the engineers displaying his produc Above all, however, it was the engine he developed and called the "dynamo" that paved the way for the universal employment of electrical heavy current. In 1881, Werner connected a steam engine directly to a dynamo. The same year, the great American inventor Thomas Edison, displayed a 300 HP dynamo at the Paris Exhibition, which aroused wonder in the beholders; but when he returned to Europe the following year, he, in turn, was surprised to see a 1000 HP Siemens direct-connected, steam-driven dynamo in the Berlin Power Station.

The interests of the brothers were far flung. In 1879 Werner placed the first 21ectric locomotive in commission, and in 1880 he displayed the first electric elevator at the Industrial Exposition at Mannheim. One of his last installations was the equipping of a North Ireland Railroad, including the water-driven dynamo and the motors in the tram cars. Alongside the monumental projects in other fields, possibly the elevator seemed relatively and momentarily insignificant. At any rate the company did not pursue its development. On Christmas Day in 1887, Werner wrote to Karl in St. Petersburg, "I regard our business only secondly as a source of wealth; for me it is rather a kingdom that I hope to leave intact to my successors for further creative work." The firm did continue to be creative and became one of the great factors in its field. Just prior to World War II, it was making one-twelfth all the world's electrical goods. Although no elevator equipment was involved in its wide range of products, the prolific brothers had made highly significant contributions to vertical transportation, directly and indirectly.