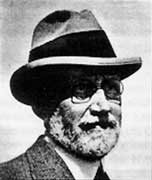 Jesse Wilford Reno, born 1861 in Fort Leavenworth, Kansas, was an inventive young man who formulated his idea for an inclined moving stairway at age 16. After graduating from Lehigh University in Pennsylvania, his engineering career took him to Colorado, then to Americus, Georgia where he is credited with building the first electric railway in the southern U.S. Reno submitted his first patent application for a "new and useful endless conveyor or elevator" in 1891. It became effective 15 months later. The machine was built and installed at Coney Island, Brooklyn, as an amusement ride in September 1895. Moving stairways were just one arrow in the quiver, for in 1896, Reno developed plans for the building of the New York City subway, a double-decker underground system that could be completed in three years. With the plan not accepted, the inventor married and moved to London where he opened his new company, The Reno Electric Stairways and Conveyors, Ltd. in 1902. His pallet-type moving stairways were being installed throughout the U.S., Great Britain and Europe, but Reno became fascinated with a new challenge -- building the first Spiral Moving Walkway. He joined with William Henry Aston, holder of a patent for the flexible pallet coupling and chain, to create the pioneering mechanism that was exhibited for four years and installed on the London railway at his own cost, but never used by the public. In 1903, the firm of Waygood and Otis Limited bought a third share in the Reno Company, but with the failure of the Spiral Walkway, Reno sold his patents to Otis and returned to the U.S.